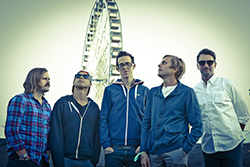 Awolnation (often stylized as AWOLNATION) is an American electronic rock band, formed and fronted by Aaron Bruno, formerly of Under the Influence of Giants, Hometown Hero and Insurgence. The band is signed to Red Bull Records, and their first EP, Back from Earth, was released on iTunes on May 18, 2010.

Frontman Aaron Bruno was approached by Red Bull Records in 2009, asking if he wanted free use of the Red Bull recording studio in Los Angeles, CA. He recorded a few songs in the studio and ultimately signed with the label, calling it more of a “partnership”, and was allowed to make the recordings that he wanted. Aaron Bruno has been with numerous bands before he created Awolnation, including chart-breaking Under The Influence Of Giants. Bruno writes all of his songs himself, but confides in close friends and family or respected artists for guidance. The name Awolnation is derived from Aaron Bruno’s high school nickname. In an interview with Kristin Houser of the LA Music Blog, he stated that he “would leave without saying goodbye because it was just easier, so that’s where the name Awol came from.”

The band released their debut album Megalithic Symphony digitally on March 15, 2011, and physically on March 29, 2011 on Red Bull Records. Megalithic Symphony features a total of 15 tracks, including the singles “Sail”, “Not Your Fault”, and “Kill Your Heroes” (produced by Brian West). Bonus tracks are also offered with the purchase of the digital album depending on the outlet. These tracks include “Shoestrings”, “Swinging from the Castles” and “I’ve Been Dreaming”.

The band’s first single, “Sail”, peaked at #10 on the U.S. Billboard Rock Songs and has gone platinum in the US and double platinum in Canada. The single got extra media attention when it was used under a video of the professional BASE jump, skydiver, and wingsuit flyer Jeb Corliss. “Sail” has been featured in the episode “Whiskey Tango Foxtrot” of CBS’s television show The Good Wife, commercials for the Fox television show House, Nokia’s commercial for Lumia and PT’s commercial for 4G LTE. It is also the background music for Under Armour’s “Are You from Here” commercial, featuring Derrick Williams of the Minnesota Timberwolves. “Sail” was covered by Macy Gray and is included on her album ‘Covered’, issued on March 26, 2012 (USA release). Recently, “Sail” was used for a Sonya Tayeh routine in So You Think You Can Dance Season 9 Episode 6. “Sail” was also used at the end of episode 5 “Dog Soldiers” in season 1 of Longmire. ‘Sail’ has also gathered major attention by Youtube Host ‘Nanalew’ along with fellow Youtuber ‘Meekakitty’ Sail “Sail” was on the soundtrack of the thriller horror movie “Playback” released in March 2012 featuring Christian Slater, Toby Hemingway, Jennifer Missoni and Ambyr Childers et.c. “Sail” gained even greater exposure when it was featured in BMW’s Olympic Opening Ceremony and in commercial spots throughout the Olympic broadcasts. Sail was also featured in a CBC Hockey Night in Canada opening tease on February 18, 2012, prior to a game between the Vancouver Canucks and Toronto Maple Leafs. It is also used as of March 2013 in commercials for History Channel’s new series, “Vikings.”

Another of the band’s songs, “Burn It Down”, is featured in the Sons of Anarchy episode “To Be, Act 1”. Also one of their songs “Guilty Filthy Soul” has been featured in the episode “Break On Through” of The CW’s television show The Vampire Diaries. The band’s songs, ‘”Sail”, and “All I Need”, are featured in Season 1 Episode 12 of Common Law episode “Gun!”. “Kill Your Heroes” is featured at the beginning and the end of Season 3 Episode 2 of the Canadian TV series “Rookie Blue” as well as the Remix of “Sail” together with Innerpartysystem in Episode 8 of the same Season. Their song “All I Need” was recently used in the season finale of the NBC show Whitney
The band is currently working on a second studio album. They are releasing two new songs, “ThisKidsNotAlright” and “Some Kind of Joke”. “Some Kind of Joke” appears as the second song on the Iron Man 3 soundtrack.